The Solomon Islands is a sovereign nation with a population of approximately 500,0001. An archipelago of 992 islands stretches 1500 kilometres in a south-easterly direction from the southern tip of Bougainville Island in Papua New Guinea to the northern border of Vanuatu.  The World Bank estimates that 81.7% of Solomon Islanders reside in the rural areas (2009) and that the majority of villages are located near rivers for supply of drinking and washing water. The mountainous nature of the majority of the country offers significant potential for renewable electricity generation through the use of micro-hydroelectric technology. However, only nine systems exist, and of these only six have proven reliable. It is suggested micro-hydro has the potential to supply the significant bulk of Solomon Islands’ electricity needs. However, it is argued that current international donor transparency procedures associated with feasibility studies have created an environment that stalls developments. 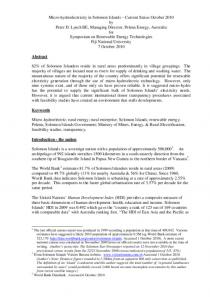