Prepared with support from the Pacific Region Infrastructure Facility (PRIF), the Tuvalu Infrastructure Strategy and Investment Plan 2016ˆ’2025 report provides a blueprint for new project investments and maintenance of existing infrastructure over the coming decade.

The plan was developed with the active collaboration of the Ministry of Public Utilities and Infrastructure, the Ministry of Finance and Economic Development, and the Ministry of Communications and Transport, The TISIP' Plan was endorsed by the Government of Tuvalu Cabinet on 7 December 2016 as an update of the plan that was prepared in 2011. The plan includes the infrastructure requirements that were identified in the Tropical Cyclone Pam Recovery and Vulnerability Reduction Plan, prepared in 2015. TISIP also falls under Te Kakeega III, Tuvalu's National Strategy for Sustainable Development 2016 to 2020.  TISIP includes projects that are ongoing or for which funding has been committed, together with 12 projects, as of March 2016, that are prioritised from a long list . The plan strengthens the existing Public Sector Investment Program with a comprehensive pipeline of projects that will require in-depth preparation, appraisal, prioritisation and sequencing.

It includes proposals designed to ensure that recent key infrastructure assets are kept in good condition and fully operational - based on an asset management framework. 60% of the proposed projects represent new investment, while the balance involves an upgrade or periodic maintenance of existing infrastructure. The increase in annual maintenance requirements, by 2025, is estimated at A$3.4m. TISIP 2016ˆ’2025 represents a total investment of approximately A$213 million over a 10-year period. Provision is made for climate proofing the new assets, and allowances for the whole of life cost analysis of projects are included for design, contingencies and incremental maintenance.

Almost a quarter of the infrastructure investments that are being considered consist of coastal protection works for which previously untapped resources of climate change adaptation funding are being sought. The 12 projects listed with the highest priority are spread across nine sectors. Three projects are located in Funafuti while nine involve one or more outer islands. 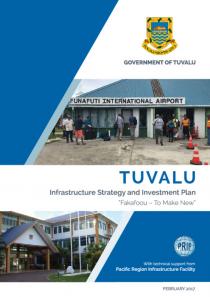