Economic contraction has been particularly severe and persistent in some of the small Island economies, with output in 2020 remaining more than10 percent below pre-pandemic levels in Fiji, Palau, and Vanuatu. Recovery is expected to be particularly protracted in tourism-dependent Island economies, with growth expected to be negative in about half of the countries, even though they have been largely spared by the pandemic. Fiscal policy is expected to play a demanding triple-role of supporting relief, recovery and growth. In many EAP countries, relief is less than earning losses, stimulus has not fully remedied deficient demand, and public investment is not a significant part of recovery efforts. At the same time, public debt has increased on average by 7 percent of GDP as governments committed to fiscal support equal to nearly 10 percent of GDP.   Governments in the region can increase the efficiency of expenditure.  Rather than curtail spending or raise taxes, governments can credibly commit to future discipline and efficiency-enhancing reforms. They could also commit to phasing out wasteful and regressive spending. 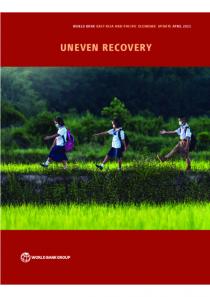