Pacific Island Countries (PICs) face an enormous challenge in supplying rural electricity. The conventional grid-system of supplying power is considered inappropriate for many areas due to the extreme isolation and low population. Off-grid power supplies of diesel generators, household solar photovoltaic (PV) systems, pico /micro-hydro schemes and wind-power projects are often considered expensive, unreliable and difficult to maintain. As a result, 70% of the region's population still lacks access to electricity. Reliable access to energy is fundamental for economic and social development as stated in the Millennium Development Goals (MDGs).

This baseline study explores the ability for microfinance institutions (MFIs) in PICs to finance the upfront cost of RE and EE systems. In doing so, the various types of RE and EE systems are introduced. Then, an in-country analysis of the three target countries - Fiji, Vanuatu and Samoa has been conducted to assess the RE and EE macro- and micro- economic climate, thus opportunities and constraints of MFIs offering energy lending. 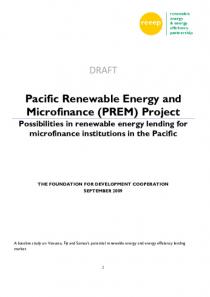