Hydro Tasmania Consulting (HTC) has undertaken the update of feasibility studies for the Huro Mini Hydropower schemes at the Makira Ulawa provinces of the Solomon Islands The objective of the study is to validate the resource assessment and system design of the 1996 Huro mini hydropower feasibility studies that was conducted under the assistance of the GTZ/ SI Ministry of Energy joint programme (1996 study).

The proposed project site is located in the Makira Ulawa province of Solomon Islands, at approximately 2 km west of Kirakira town. Kirakira is located on the north coast of Makira, one of the six larger islands of the Solomon Islands.  The hydrology of the proposed Huro River mini hydro development as outlined in the 1996 study has been reviewed.

In general, the outcome is that there is likely to be more water available compared to the adopted duration curve of the 1996 study. 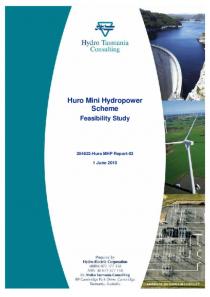