The basic objective of the National Building Code of the Kingdom of Tonga (NBCKT) is to ensure that acceptable standards of structural sufficiency, fire safety, health, and amenity, are maintained for the benefit of the Kingdom of Tonga now and in the future. The requirements included in this NBCKT are intended to extend no further than is necessary in the public interest, to be cost effective, not needlessly onerous in their application, and easily understood.

The NBCKT was originally published in 2001 with an accompanying partial commentary to explain the more complex provisions of the code and a companion Home Building Manual Kingdom of Tonga (HBMKT). The 2001 NBCKT was updated in 2007 into a Tongan language version.

Sections A and B of the NBCKT 2001 were reviewed, strengthened, and updated in 2018 but are still in draft. A Domestic Dwelling Structural Supplement (Section DH) was published in 2018 to replace the 2001 HBMKT.

The NBCKT is governed under the Building Control and Standards Act 2002 as revised in 2016. 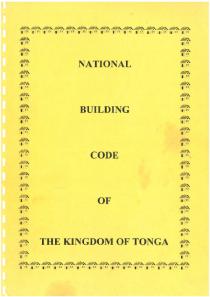