Inadequate infrastructure maintenance has long been recognised as a challenge. The failure to manage and maintain existing infrastructure assets in Pacific island countries has resulted in a large infrastructure debt - representing the gap between what has and should have been spent on infrastructure.

The premature deterioration of infrastructure affects lives. It translates into fewer people having access to health clinics; fewer children going to school; deaths from vehicles colliding when negotiating pot holed roads; and disease resulting from the contamination of water sources because of blocked drains, untreated sewage, and the exposure of hazardous waste.  The lack of preventative maintenance is also costly in a financial sense. It is well known that preventative maintenance provides a better financial return than investment in new infrastructure.

This is important given Pacific Region Infrastructure Facility (PRIF) partners alone will be spending an estimated USD1.7 billion investing in core economic infrastructure between 2008-09 and 2016-17. 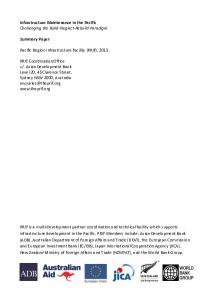