Responding to the impact of climate change is high on the agenda of all Pacific island countries. Communities that live on low-lying atolls, like the Republic of the Marshall Islands (RMI) are particularly vulnerable. RMI's Nationally Determined Contribution (NDC), under the United Nations Framework Convention on Climate Change, is to reduce its 2010 greenhouse gas domestic transport emission levels by 16% by 2025, including efforts to reduce emissions from its shipping fleet.

However, the shipping industry, an economic lifeline for the country, is lagging behind other transport sectors in modernising its fleets and improving the sustainability of its services. This study establishes baseline data to support future improvements to maritime transport services in RMI. The baseline data will be used to establish benchmarks for the performance assessments as part of a 9m euro project funded by the Government of Germany and managed by Deutsche Gesellschaft for Internationale Zusammenarbeit (GIZ), the German aid agency.

This Transitioning to Low Carbon Sea Transport' project will investigate new clean technologies in commercial trading ships and in small craft used between atolls in the Pacific. The project is also a cornerstone of the framework of activities of the Micronesian Center for Sustainable Transport (MCST), to enable the use of baseline data for further projects that are proposing new technological and operational improvement concepts. 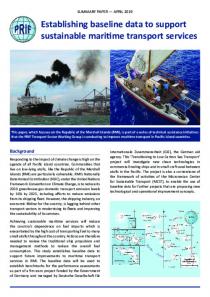