Unsettled: Water & Sanitation in Urban Settlement Communities of the Pacific

Unsettled: Water & Sanitation in Urban Settlement Communities of the Pacific

Unsettled: water and sanitation in urban settlement communities of the Pacific, highlights the reasons why thousands of families in Melanesia - Solomon Islands, Fiji, Vanuatu, and Papua New Guinea (PNG) - are unable to access basic water and sewage services. The report makes a number of recommendations on how governments, utility providers, charities and donors can work together to improve access and affordability.

In the Melanesian capital cities of Honiara, Port Moresby, Port Vila and Suva, up to 45% of the population live in informal settlements - areas of poorly-constructed housing on land without formal legal titles, often on flood-prone, steep or cramped plots of land. As more people relocate to the capital, and housing and infrastructure planning remains inadequate, this could grow to 65% of the capital city residents by 2023.

The rapid growth of settlements is compounding health and social problems associated with poor provision of water, sanitation, and hygiene services - including the spread of diseases like cholera and diarrhea, increased vulnerability of women and children, and an erosion of privacy and dignity. Unsettled: water and sanitation in urban settlement communities of the Pacific was written with the cooperation and support of United Nations Habitat, UNICEF and the Pacific Region Infrastructure Facility (PRIF). 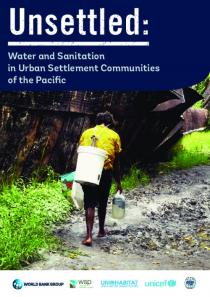