In Asia and the Pacific, the need for new infrastructure is growing rapidly. Investments in both urban and rural areas must reach an estimated US$4.7 trillion over the next 10 years to sustain growth in the region, with two-thirds of that amount required for new infrastructure.  It is also increasingly understood that negative environmental and social impacts of poorly conceived infrastructure investments will place additional burdens on current and future generations.

There are mounting questions and concerns about the impacts of business-as-usual infrastructure development, such as resource degradation, pollution, waste and corruption in public spending and private contracts, and uneven distribution of benefits that tend to exclude poor people. Also, an often fierce debate continues to rage around the appropriate roles of the public and private sectors in the financing, ownership, and management of infrastructure. 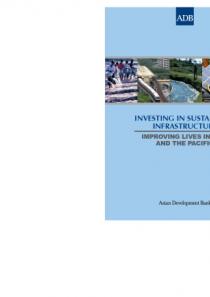 Clear Investing in Sustainable Infrastructure - Improving Lives in Asia and the Pacific1.04 MB