The Tarawa Water and Sanitation Roadmap 2011-2030 [the Roadmap] prepared under TA 7359-KIR involved an assessment of population growth, land use planning and urban development, and the mapping of the urban groundwater lenses on South Tarawa with the estimation of their sustainable capacity and an assessment of water quality. The existing and potential water sources for Tarawa, especially South Tarawa were investigated.

The findings raised concern for South Tarawa where all natural water sources were found to be either polluted or at risk of pollution which will deny their use as safe water supplies. The population is growing rapidly and largely unchecked and will more than double in the next twenty years.

Development is presently unstructured and with a lack of adequate regulation and control, increasing amounts of scarce land are being denied for residential occupation. Large tracts of land under government ownership previously set aside for development will be inundated in the near future through the combined impacts of sea level rise and storm surge, requiring expensive fill and modification for development. Community health is poor and deteriorating. 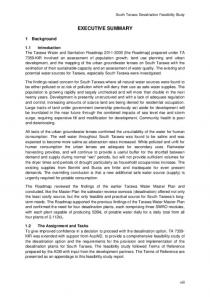